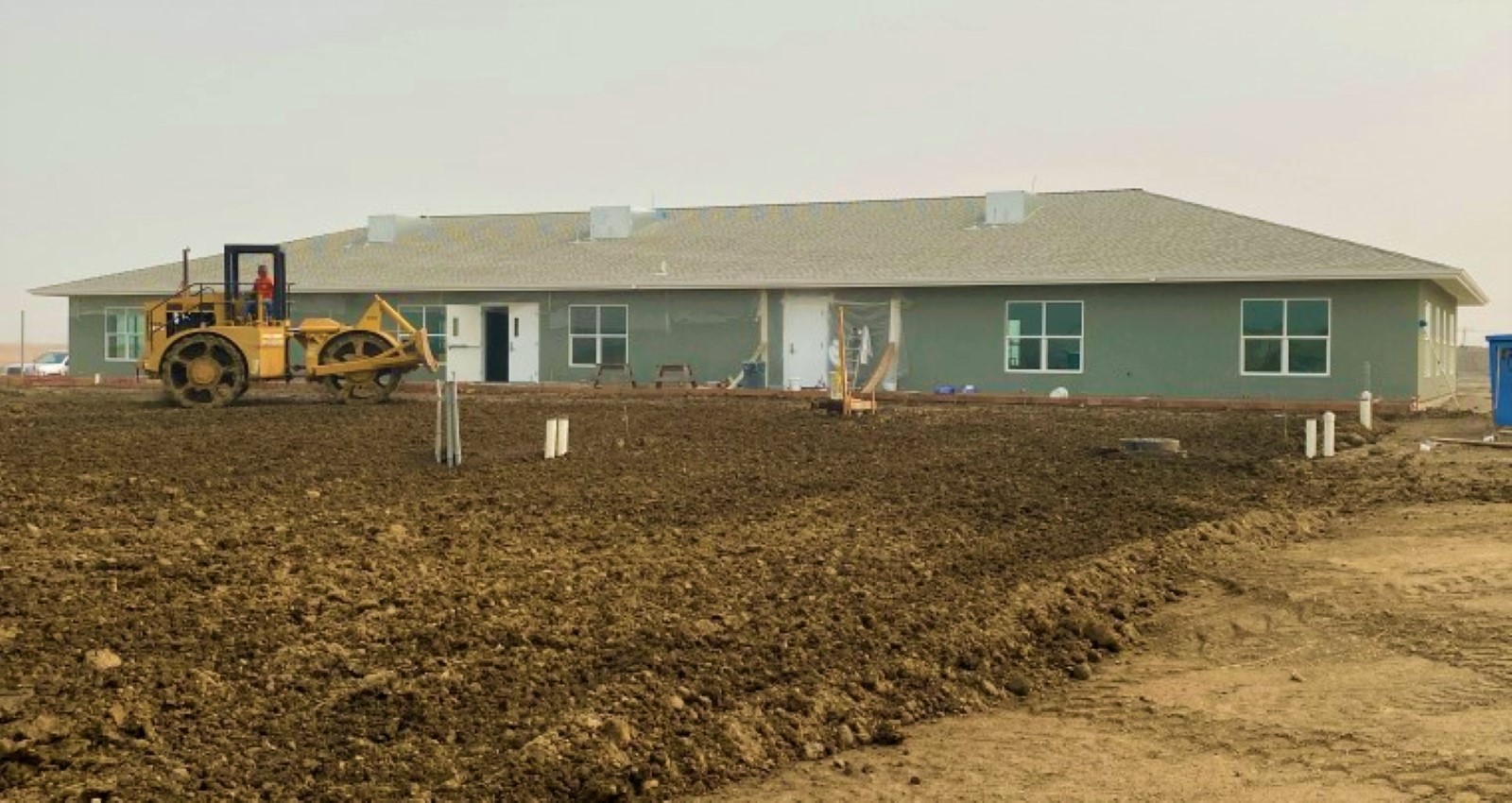 Project could set a trend in providing services to homeless

A $2.3 million emergency homeless shelter could set a trend across California for providing a single source of services.

Construction on the first part of the facility began in early June and is scheduled to be completed by mid-November following more than a year of discussion.

But the centerpiece of the project — a single-story apartment-like building in the middle of a now-empty field northeast of Beamer Street and County Road 102 — is only the first part of the multi-prong approach that will provide shelter, health care and employment services for more than 100 people.

By comparison, Fourth & Hope now has 48 beds and 17 beds for its family shelter.

Acting last week, the City Council voted 5-0 to divide the 128-acre, city-owned parcel at 1901 E. Beamer St., into four parcels, creating a “subdivision” of sorts that will allow the project to expand as well as enable public-private use.

Briefing the council, Stephen Coyle, Woodland’s deputy community development director, said the subdivision was needed in part because the land is technically in a flood zone, which requires preparing an environmental impact statement. Dividing the acreage allows each element of the entire project to proceed as needed.

In fact, the shelter and ancillary buildings will take up only eight acres with the remaining 120 acres still owned by the city.

In addition to the single building nearing completion, there will also be four commercial modular trailers put in place to provide a commercial kitchen, a laundry, and men’s and women’s bathrooms with showers until funds are available to provide permanent facilities.

The second phase of the shelter project, which has not been funded, will lead to the construction of a second building that will include a cafeteria/multi-purpose dining and meeting space, reception and management office, and three secure offices for individual counseling, case management, and administration.

The ten-year operating agreement between the city and Fourth & Hope starts once the shelter is finished and operating.

Fourth & Hope staff will try and assist individuals from other communities to return to their community of origin to a safe shelter environment, family, or caregiver, whenever feasible. Also under the agreement, Fourth & Hope will make all reasonable efforts to discourage illegal camping, trespassing, and loitering both on and off the shelter site.

Talk about a shelter, including the relocation of Fourth & Hope, started about two years ago, primarily as a way of dealing with the homeless who frequent the downtown area, often sleeping in doorways, alleys or at city or county parking lots. There have also been problems with some homeless who are mentally ill or are addicted to narcotics.

It was due to the growing number of homeless — now estimated at nearly 400 individuals — that the city created the Homeless Outreach Street Team under the Police Department, which works to identify them, offer them assistance, or arrests them if needed, as well as identify and clean up campsites.

In mid-April this year, the council declared an emergency and authorized the Emergency Shelter Project, enabling the city to determine the work would be exempt from the California Environmental Quality Act as a project undertaken to prevent or mitigate an emergency. That action ultimately led to a series of decisions in May that provided a no-bid contract that went to Broward Construction for the 6,500-square-foot single-story structure.

Earlier, Coyle said the East Beamer Way Emergency Shelter represents a “paradigm shift” in serving Woodland’s unhoused, both current and future through the provision of both shelter and services.

Both Woodland and Yolo County, in collaboration with local nonprofit Friends of the Mission, provided the funds to build the new adult-only shelter.

At present, completion of the project is set for Nov. 14, when the city will turn the keys and land over to Friends and Shelter operator Fourth & Hope. The only snag in the project is that Pacific, Gas & Electric hasn’t been able to provide power to the site due to the necessity of restoring power to those communities across Northern California that have been destroyed or damaged by wildfires.

If power isn’t reliable by the time the building is ready to open, then the city may move in two or more portable generators.

Coyle has noted in the past that the city will either pay for building a shelter and services complex or pay for cleaning up the mess made by transients or jailing them.

Leaving them on the streets, he said recently, “results in substantial personal and property damage, illness and death.

“People struggling with homelessness often become frequent users of emergency departments,” he wrote to The Democrat recently. “Housing homeless residents decreases by nearly 61% the number of visits made to emergency departments; the formerly homeless community is more receptive to interventions and social services support, as housing is healthcare.”

Building and operating a shelter is not inexpensive. However, the unsheltered generate increasing, ongoing city costs for police, fire, EMT, and code compliance responses, for the county’s courts, sheriffs and health services, and for health care providers. They burden local businesses, residents, parks, and overwhelm nonprofits like Fourth & Hope.

The “externalized” cost to a community may approach three times the cost of building and maintaining a shelter,” Coyle stated.

On Tuesday, during his update to the council, Coyle said the building now being completed is very simple in design and will initially serve about 70 people due to the coronavirus pandemic. But eventually, it will house 100 adult women and men as well as an “assembly area,” a men’s sleeping area and a separate women’s sleeping area.

He expects residents to start moving in on Dec. 1. Already some of the homeless who have been frequenting the downtown area are making their way toward the northeastern part of the city awaiting completion of the shelter. 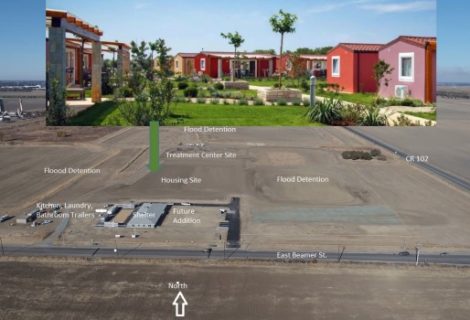 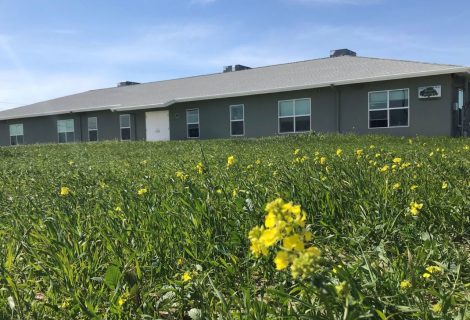 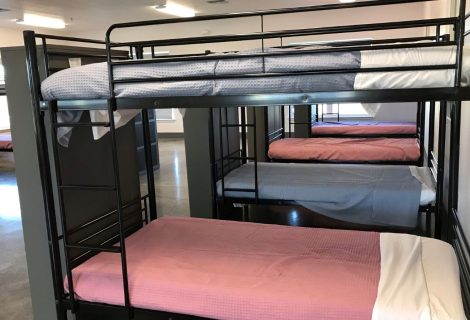 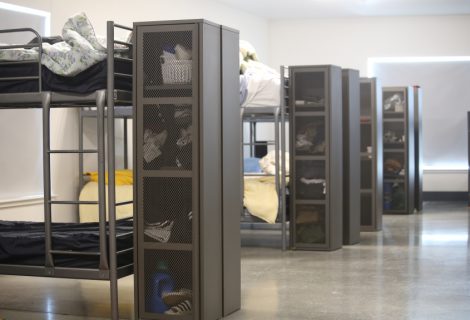